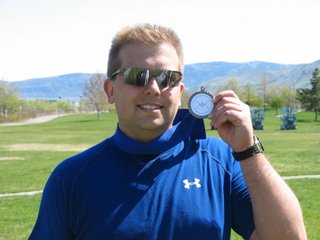 Bill and Steph are back and here is the recap:

Steph and I flew into Seattle on Friday to an overcast rainy day...no surprise for Seattle I guess. We spent the night there and discussed our run with a few of the locals who informed us that Wenatchee happens to be the Apple Capital of the World.

Saturday morning we walked to coffee and admired the Seattle sights before driving through the mountain passes heading for Wenatchee. As we approached the city we saw orchards and orchards of apple trees coming into blossom. The town of Wenatchee is located on the Columbia River and has a population of 60,000 it is very quaint. We stopped by the local sporting goods store to pick up our race packets...Steph's number was 423, which was the date of the race. She's very numbers-oriented and the combination of this 'sign' and the fact that 23 is her lucky number made her even more excited that this was her first race! With the help of the hotel clerk we found a nice Italian restaurant in East Wenatchee where we enjoyed a nice early meal and then got a good night sleep.

Sunday morning was sunny and 44 degrees. We walked from the hotel to the starting line for the 8am start. We then found out that the race wouldn't start until 8:15 (after the kids' run), a little more than 30 min away. We waited patiently making sure that we were in the sun just to stay warm. At 8:15 the group was off.

Steph and I enjoyed a fantastic 6.2 mile run. Steph completed the 10k course in 1:08:19. I think she's got the running bug now. She was elated at finishing the run and I was proud as can be.

My run turned ugly after mile 10. On the East side of the Columbia River the trail we were running on was a bit hillier and the stiff 20 mph headwind really caused me to lose focus and not run as much as I should have for this 5 mile stretch. To make matters worse I would have to do this section twice (loop course)!

With a mile and a half left I met the sweep crew, a one man biking machine who I later found out had done Boston just the week prior. My only concern was finishing with an official time, he assured me that I would definitely make the 6 hour cut off and he would call ahead just to be sure that the finish line did not pack up.

I arrived at the finish line at 5:53:41. Definitely not my best showing but it is official so I have my 5th state in the bag.

Steph and I both had a wonderful time, the views were spectacular with mountains in the background at every turn, and the people were very nice. We would both recommend this race to any one who wants to go to Washington but I would remind you to practice running 5-10% graded hills and into the wind!
at 1:26 PM

Your are Excellent. And so is your site! Keep up the good work. Bookmarked.
»

Greets to the webmaster of this wonderful site. Keep working. Thank you.
»